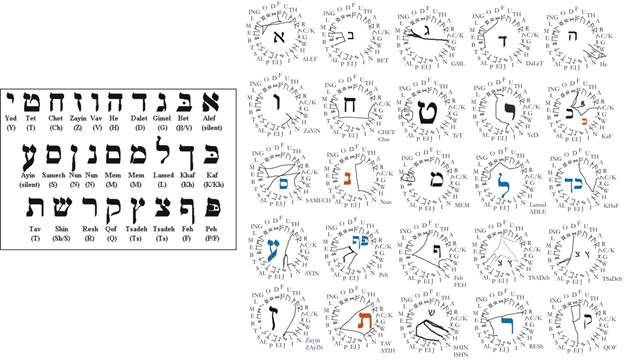 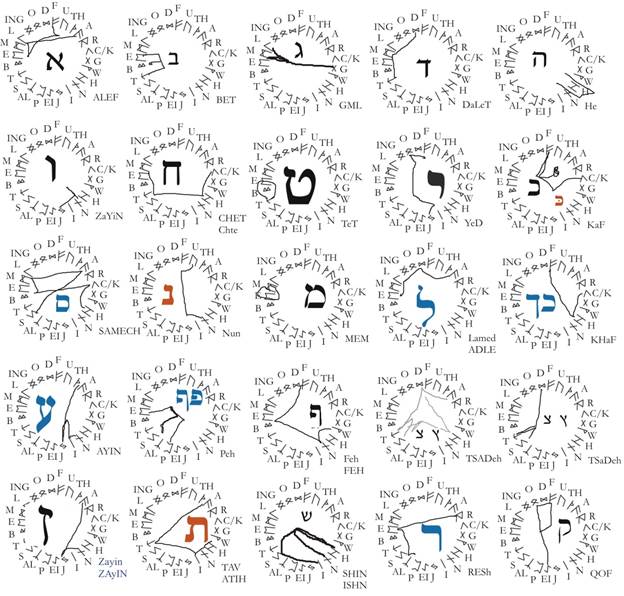 Those are only sketches of what is possible. Each symbol minus three the sound and how the Hebrew character are drawn; each point points to its equivalent on the Futhark wheel. The three which are labeled the letters are out of sequence but still point to the equivalent sound.

This adds additional evidence to my base theory regarding my work on the bible. There is many things going on in the bible beyond just the obvious written words. Since each word in at least the Hebrew bible there is both a mathematics involved as well as each Hebrew character is a word in some ancient presumed Indo European Language. Where each character of the Futhark represents a concept/word. String several words together and you suddenly have a much more complicated book hidden behind the Hebrew characters.

as the attached graphic sketches show; each ת character has a specific Futhark equivalent which in ת it is TAV. TAV means [ TA = 14 (Sound/God) V = 12 (Strength/strength of a beast; depending on use in the sentence)]. In brief Direction, Strength, Beast means "Direct from god to use your strength"

"The heel of the foot has no feeling or knowledge. Placing the heel of one’s foot inside a shoe, where it’s dark, represents the concept of accepting the yoke of Heaven in a cold, dark world. Just as the feet are the foundation and the support of the human body, so, too, accepting the yoke of G-d is the foundation of Judaism. One must have the humility to accept the will of G-d beyond question and beyond rational under­standing. It is the letter tav, the letter of humility, that allows the individual to ongoingly embrace the love of G-d and Torah which all too easily can be left behind through human ego and arrogance.(par, 11)"

There are 15 to 30 characters in the first three words "in the beginning" since every point to character has a specific meaning above and beyond just the basic meaning; this has serious implications.